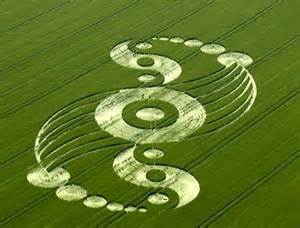 The Crop Circlers are a nomadic tribe, constantly moving in a great sweeping arc from Avalonia to the Wiltshire Downs and Salisbury Plain – and back again. According to tribal lore they must continue to make this endless circling journey, renewing the energies of the land, or else the crops will fail.

There is little or no crime amongst the Crop Circlers, though a local anthropologist who studies their intensely nomadic habits puts this down to sheer exhaustion. The only recorded crimes were committed by a cereal killer from the Root Crop Clan, whose members have in any case always had a somewhat muddy reputation.

Sightings of the Crop Circlers – who seem to pop up overnight out of nowhere – are more common during the summer months. Periodically they gather at tribal meeting places – or moot points – to hold what are called “Cornferences”. Very little is known about these apart from the fact that discussions occur on tricky questions – or moot points.

The tribal elders claim to communicate with “visitors from the stars” using a complex pictographic alphabet. Some tribal members point to the star-system Alpha Beta Centauri as the obvious origin of these symbols, but this view is dismissed as flippant by those of a more Sirius nature.

In past years the Crop Circlers suffered from an intermittent exodus of their brightest tribal members. Lately, however, they have managed to largely stem this grain-drain by offering extra inducements (carrots, for example) for continuing loyalty. This policy has proved especially successful with members of the Root Crop Clan.

It is known that Professor Charley Barley claims maternal descent from the Crop Circlers through his great grandmother. But despite his acquisition of a salaried post at the University of Avalon, he dismisses as “grain brains” those clan members who accuse him of having joined the treacherous exodus of tribal intelligentsia.