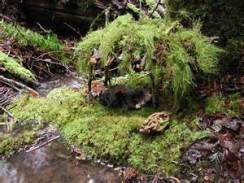 The eco-pagans live in benders, domes, yurts and other shelters, hidden away in leafy glades and bushy coombes. But the encroachments of modern civilisation have forced these shy, rarely glimpsed peoples ever deeper into the woods and forests of Avalonia. Even worse, these last few descendants of ‘the folk’[1] must constantly hide from professional explorers sent by government to impose British citizenship and enforce compliance with housing regulations.

Amateur bounty-hunters, drawn locally from the ranks of Glastonburgers, join this relentless search, whilst officials from Sheepdip District Council aid the hue and cry with maps, satellite imaging and tracker-dogs. Yet against this whole panoply of the modern state and its vast array of detection techniques, the eco-pagans have only tree-craft, sling-shots and green skin.

At first sight it seems an unequal battle. But unbeknownst to the powers-that-be, the powers-that-were-and-will-be-again are with these plucky little folk. Yes, the Goddess is stirring; the Priestesses of the Nine-fold Muse evoke Her olden names and Pan of the Woods is once again abroad his ancient green domain.