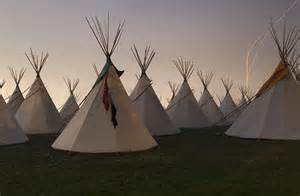 It says much for the broad-minded tolerance of Avalonian citizens that they permit, even encourage, an entire separate country (the Indian Nation) to share their sovereign territory.

Being a tribal confederacy, the Indian Nation maintain strong links with their blood-brothers and blood-sisters outside of Avalonia – the semi-nomadic Tribe of Doris, for example, or the Black Valley Tipi Tribe, who are normally confined to a Reservation in mid-Wales.

Local pow-wows usually take place in the Glastonbury Assembly Rooms and are sometimes attended by Chieftains and Medicine People from the ancestral homelands in North America. These emissaries have exotic names like Sun Bear (no relation to Yogi), Harley Swiftdeer (runner-up in the 2001 Isle of Man TT), Dreamwalker (cousin to Sleepwalker) and Fire Wolf (Incendia Lupus).

Tribal members typically start their day by eating food derived from ‘power-plants’ (Cornflakes or Weetabix for instance) – whence the origin of the term ‘power-breakfast’. This is usually followed by a pipe ceremony which – depending on the size of the pipe, the power of its ‘power-contents’ and the number of participants – usually takes care of the rest of the day quite nicely.

At dusk, a ‘sweat lodge’ is normally taken to rid the body of the toxins absorbed from the pipe ceremony. Hot stones are placed in a small pit at the centre of a makeshift sauna. Since it is quite dark inside the sweat lodge, participants are very careful not to sit in the ‘power-spot’ as the resulting burns can be quite painful and the treatment of these (see below) even worse.

Before retiring to their tipis for the night, some tribal members take their ‘power-animal’ for a last walk, whilst others ritually strike their nearest neighbour with a false hair-piece. This obscure act, known as a ‘wig-wam’, usually causes little damage unless performed by an important tribal elder (aka a big-wig).

Any serious injuries brings into play a ‘Medicine Wheel’ – the Indian Nation’s main healing device. This large and heavy artefact is slowly rolled over the patient’s body. It does not effect a cure, but the severe pain induced does cause the victim to forget whatever it was they originally complained of.