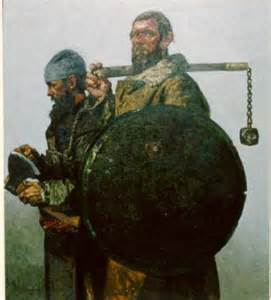 “Medieval Brigand” is synonymous with “member of The Convoy“ – being another name for a Hedge Monkey (see here) who has finally “obtained” a suitable vehicle and thus been accepted as a fully-fledged Convoy-ite. The rites of initiation are too gruesome to describe in any detail here[1], but those who make it aboard are then said to have ‘oiled their back axles’.

An early reference to The Convoy stems from Stonehenge in June 1976. The authorities had intended to stop the annual Stonehenge Festival, but these plans were pre-empted when a convoy of vehicles (henceforth the Convoy) arrived on-site, hot drive from Challacombe Free Festival on Exmoor.

The Government put out the story that it was powerless to act because the ancient monument had been hi-jacked, and that any attempt to evict the festival-goers would likely result in hippies destroying the Stones. At this point The Convoy’s image had become that of a monstrous line of ships on a dark, storm-tossed sea – steaming without signals or lights, and leaving a trail of damaged police cars.