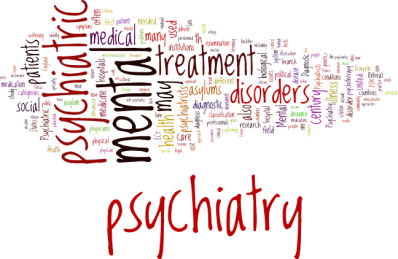 Psychiatry: its origins, how it became threatened and its response:

Psychiatrists are doctors of medicine who have undergone additional, specialist training.

The path towards establishing psychiatry as a mainstream profession effectively began with Sigmund Freud, a medical doctor who famously developed psychoanalysis as a means to help some of his patients. This ‘talking treatment’ approach included the exploration of dream-symbolism and the unconscious self, a focus on repressed (unconscious) sexual desires (e.g. the ‘Oedipus complex’) and the use of free association … where the patient talks freely, without censorship or inhibition, about whatever ideas or memories occur to them. Within this approach, anxiety and depression (for example) were seen not as symptoms of disease, but instead as emotional distress arising from internal psychological conflicts.

The psychiatrists who followed in Freud’s footsteps keenly adopted psychoanalytic theory, partly because it hugely expanded their potential ‘customer base’ beyond the asylums, opening the way for the treatment of patients in private practice.

As the 20th century wore on, however, the effectiveness of psychoanalysis was scrutinised and increasingly criticised … to the point where psychiatry as a reputable profession came under serious threat, partly because of problems over diagnostic ‘fuzziness’, and also because of the rise of counselling[1] as a rival form of talking treatment offered by practitioners who didn’t need to have medical doctorates.

In an effort to protect their guild interests – and to safeguard the very survival of psychiatry – the profession switched direction. It enthusiastically adopted a ‘disease model’ for mental ill-health, a model that fitted well with the medical background of the doctors involved. And with this new model, the treatment of patients became increasingly centred on prescription drugs.

So began the development of an institutionally-corrupt financial relationship with the pharmaceutical industry. And so also began psychiatry’s journey down a deeply unscientific path.

The American psychiatric ‘bible’ is the Diagnostic and Statistical Manual (DSM) of Mental Disorders (equivalent diagnostic manuals exist in Europe and elsewhere). The first DSM edition, published in 1952, contained 106 categories of supposed mental disorder, including homosexuality as a “sociopathic personality disturbance.”

Fast forward sixty odd years: the recently published 5th edition (DSM-5) now lists well over 600 categories of supposed mental disorder … a nearly six-fold increase compared to the 1st edition. This is, of course, excellent news for the business and commercial interests of both the psychiatric profession and the pharmaceutical companies.

Thus, egged on by vested commercial and guild interests, almost every type and incidence of emotional, personal and ‘mental’ problem or distress has been turned into a ‘disorder’ or ‘illness’ or ‘syndrome’ or similar type of stigma – to be treated (of course) mostly by means of prescribed drugs.

In what way has this process been driven by pseudo-science? In what way is the bio-physical ‘disease model’ adopted by psychiatry so profoundly flawed? The main answer is simple: after all this time, after decades of research, there is still a complete absence of any biological markers for – and biogenetic causes of – ‘mental’ ill-health.[2]

Take, for example, some of the more severe forms of ‘mental’ ill-health. Dr. Lucy Johnstone (a psychologist) has written:

“We have known for a long time that terms such as ‘schizophrenia’ are scientifically meaningless. They are not actually ‘diagnoses’ in a medical sense, since they are not based on patterns of bodily symptoms or signs. Instead, the criteria consist of a ragbag of social judgements about people’s thoughts, feelings and behaviour.  The people who are so labelled may well have difficulties and be in urgent need of help, but this is not the way to help them.”[3]

Or, for further instance, take so-called Attention Deficit Hyperactivity Disorder (ADHD). As one of the more enlightened psychiatrists, Dr. Sami Timimi, has written:

“ADHD is … ideally placed as a convenient diagnostic ‘dumping ground’ allowing all of us (parents, teachers, doctors, politicians) to avoid the messy business of understanding human relationships and institutions and their difficulties.’[4]

Or as John Shlien, Professor of Education & Counselling Psychology at Harvard University, has written:

“Diagnosis is not good, not even neutral, but bad. Let’s be straightforward and flat out about it, it is not only that its predictions are flawed, faulty and detrimental to the relationship and the client’s self-determination; it is simply a form of evil. It labels and subjugates people in a ways that are difficult to contradict or escape.”

The good news, however, is that the crisis of psychiatry has now reached the point where even the authors of diagnostic manuals are starting to finally admit that psychiatric diagnoses are not supported by evidence.

So where to now?

The reform of ‘mental’ healthcare is a vast subject and contains many needed elements (not least, under the heading of ‘prevention’, a priority focus on children and young people – see here, for example, ‘Bad Education’). But we can identify at least three of the main strands without further ado.

The upshot of these is that psychiatry, as a profession, becomes largely redundant … at least in anything even remotely resembling its current form.

Of course the majority of psychiatrists – and the drug companies whose profits thus become threatened – will loudly protest. But when it comes to emotional healthcare, the truth is that the majority of doctors do not know best.

[2]     As used here at least, the term ‘mental ill-health’ does not include conditions – such as dementia – that are caused by bio-physical factors and involve a loss of brain function (e.g. memory).