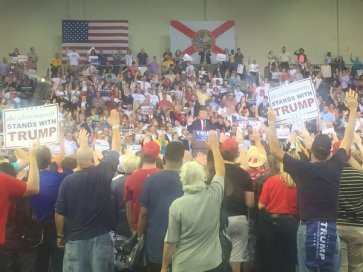 I had previously seen Donald Trump merely as a bad joke – albeit a misogynist, a homophobe, a racist, a narcissistic blow-hard, a con-artist and serial liar.

But I now realise that he’s much worse than this: a disguised but dangerous neo-fascist, leading a large populist movement, intent on undermining faith in democracy, stirring up civil unrest, providing encouragement for post-election violence and an insurrectionary movement of “patriots”.

He says the American democratic system is rigged and refuses to say that he’ll accept the election outcome. He now refers to Obama’s presidency as a “regime” and says he’s going to put Hillary Clinton in jail. He muses about “2nd amendment solutions” (i.e. the use of guns). He’s promised to forcibly deport 11 million people (illegal immigrants) … an act that would require busting in on tens of thousands of businesses and homes, not to mention the establishment of mass camps where these 11 million women, men and children can be herded and concentrated together.

He has spoken of his admiration for “strong men”, citing Iraq’s former President Saddam Hussein and Russian President Vladimir Putin, and has openly encouraged the Russians to hack into the computer networks of both the Democratic Party and U.S. government agencies. He stirs up hatred against ethnic, religious and other minorities. His supporters put out videos like Big Guns, which shows an ex-Navy Seal firing a high-powered, rapid-fire gun, accompanied by ominous voice-overs about the Democratic Party.

He has tweeted a six-pointed star, echoing the Jewish Star of David, positioned next to a photo of Clinton against a backdrop of money (see above). At a recent campaign rally in Florida he has evoked fascist symbolism by asking his supporters to raise their right arms and pledge to vote for him (see top of page).

Trump has been endorsed by David Duke, head of the white-supremacist Klu Klux clan, who said: “voting against Donald Trump … is really treason to your heritage.” He has been endorsed by a variety of far right political leaders across Europe, including Jean-Marie Le Pen, founder of the National Front in France.

In February of this year Trump tweeted a quote used by the Fascist dictator Benito Mussolini: “It is better to live a day as a lion than 100 years as a sheep.” Soon afterwards, a group calling itself the ‘Lion Guard’ – who use the same quote as their tag-line – launched a web site, seeking to organise his supporters into a militia that is “willing to forcefully protect” Trump from people it perceives to be threats. Some may recall that Mussolini rose to power on the strength of his own militia, a group that also claimed to be “defending” the fascist leader from his enemies.

Trump has instructed crowds to “Knock the crap out of them” if they see a protester at his rallies, and pledges that he will pay the legal fees of any of his supporters who is brought to trial on assault charges.

His most ardent supporters call him the “God-Emperor”.

Things have come to pretty pass when such a man – a neo-fascist – is the Republican Party’s nominee to be the next President of the United States.