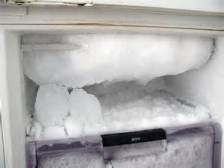 Suddenly, after many problem-free years, the plastic bottles of milk no longer sit comfortably on the fridge-door bottom nor fit neatly under its middle shelf. Instead they must be forcibly wedged in, causing the middle shelf to bulge upwards in a way which suggests that, very soon now, SOMEONE will be to blame!

There are only three possible reasons for this situation:

I’m suspecting reason number three. It makes sense. The fridge is old: advancing years cause shrinkage in humans, so why should a mere electrical appliance be any different? The fridge also feels colder than before, which of course causes further contraction … just as heat causes expansion and eggs are eggs (unless they happen to be infected with salmonella, in which case the latter is by far the most important element to note in the eggs’ makeup).

So, old and cold … does this mean we need a new, young and warm refridgerator? Call me old-fashioned, but I think not.

Even more shocking than this fridge-shrinkage is the existence of the “Overflow Freezer” (as it’s apparently called). I didn’t even know that it existed until today, despite the fact that it’s three feet high and forms the entire bottom half of the fridge. I’ve never used it and so have never looked at it and so have never noticed it: nils utilisi, nils videonta, non-existum per io. And that goes for everyone else in the office too, judging by the bulging wall of frost that stares defiantly back when you take up a crowbar and force open the outer door.

Anyway, this is Reff Ridge switching off for now. So until the next Ice Age or Fro Zen moment (whichever never comes first), stay frosty!