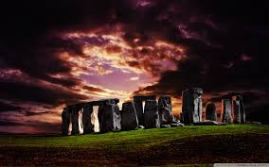 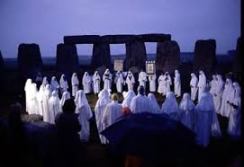 Way back in the early 1960s, Mods and Rockers were in the habit of spending just one night, at the time of the Summer Solstice, on opposite sides of a very narrow trackway at Stonehenge. During the brief hours of darkness a temporary truce to hostilities was called, but this always ended when the first rays of dawn hit the Heel Stone. There were never any serious fatalities.

The first real Stonehenge Festival took place in 1975; the last in 1984, when Big Brother was watching just a little too closely. The Stonehenge Freedom Fighters took shape as an underground movement soon after, gaining especial impetus following the notorious “Battle of the Beanfield” in June 1985, when over 500 travellers on their way to Stonehenge were rounded up and arrested by the police.

Explained in crudest terms, a Stonehenge festival-goer was having a holiday – the poor person’s equivalent of a week in Blackpool. The festival was a sort of Butlins-for-the-unemployed, although there were very few redcoats about. This paucity of redcoats was not that surprising, given the description of Stonehenge as a place that “became known over the years as a no-go area to which deserters, psychopaths, and prisoners escape to from their respective Broadmoors”.[1]

Clearly the Stonehenge Festival was not much of a spiritual experience for most of those who camped there. However, and after the authorities had banned the event, the Stonehenge Freedom Fighters[2] avowed that the festival had been the mystic zenith of a national pagan pilgrimage. Egged on by sundry Druids, a holy war was declared.

Stonehenge Campaign meetings are held at various secret locations, many of them in Glastonbury at the Assembly Rooms. Cadres from Glastonbury are prominent in the struggle. These have included Rollo Maughling (Arch-Druid of the Glastonbury Order of Druids) and the Reverend Boris Gestetner (parish priest of Avalonia, doctor of divinity, curator of the Avalonian Museum of Theological Artefacts and member of the House of Lords). They have also included Burning Spear D’Albion (alias Albion Dave, brother of Ean D’Albion, but no connection to the Albion Dance Band, who were described in The Glastonbury Ex-Communicator as a “cud-chewing shabby old ensemble of incontinent musicians”).